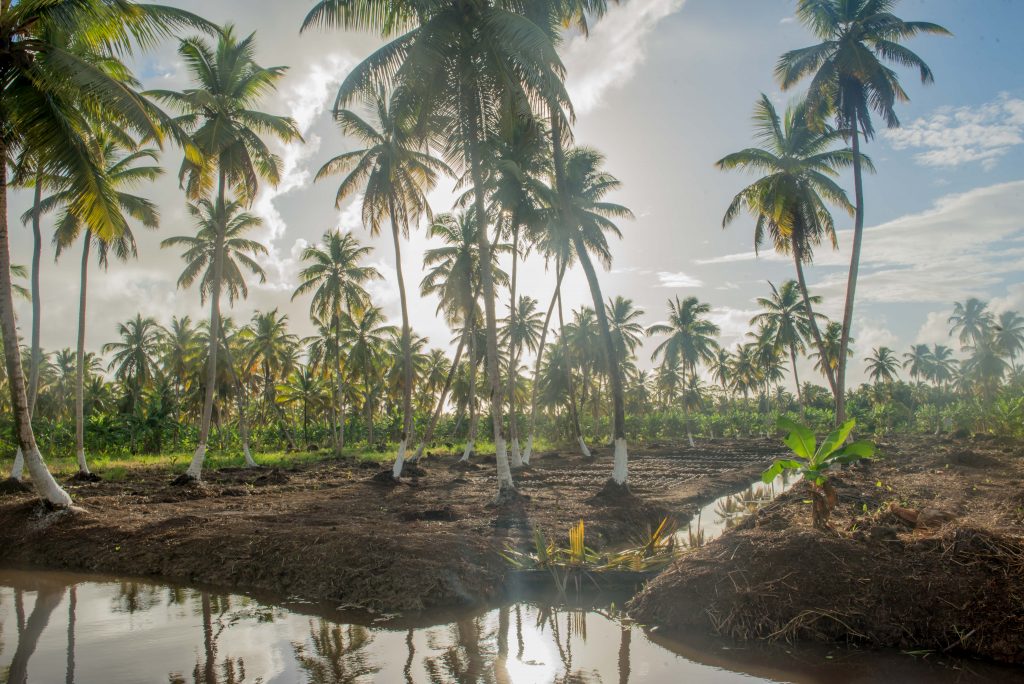 Since around 2010, Guyana has emerged as the supply basket of coconuts for the CARICOM region. The country exports a range of coconut products with an estimated total export value of US$4.35 million in 2013 (Sealey-Adams & Hanif, 2015). Ranked by shares of export value, the top export product is de-husked coconuts, accounting for approximately 70% of total export in 2013. A distant second is copra, or dried coconut kernel, followed by crude coconut oil, each, respectively, accounting for just 15% and 9% of total export value in 2013 (Sealey-Adams & Hanif, 2015). The share of non-traditional export products—primarily coconut water-- still remains small, just about 2% of total export in 2013 (ITC/CARDI Coconut Value Chain for the Small Caribbean Economies July, 2016). The Dominican Republic and Trinidad & Tobago together accounted for over 80% of the total export value in 2013. While the Dominican Republic is the main export destination for de-husked coconuts, for the production of packaged coconut water, Trinidad & Tobago produces a diversified range of products, with coconut oil a central focus. The existing export trade most likely does not optimise the value of Guyana’s production; coconuts from Guyana, and from the Pomeroon River region in particular, are recognised for their exceptional sweetness and flavour.

In February 2018, Doug Hawkins visited the Stoll Estate near Hackney, on the Pomeroon River. The Stoll Estate, extending to some 700 acres of Pacific Tall coconuts, between the Pomeroon River and the Atlantic Ocean, in the North East of Guyana, is in the process of being rehabilitated and replanted (with dwarf and hybrid varieties) by Pomeroon Trading Inc, a client of Agronomy Capital Advisors (ACA). The journey to the Stoll Estate from the Guyana capital, Georgetown, takes around four hours. After leaving Georgetown by car, the ACA picked up a river taxi on the Essequibo River, heading for Supernaam a busy trading port from which we drove some 65 km (all paved road parallel to the coast) to Charity, a township serving the region’s rice production sector, and having a strategic location on the Pomeroon River. Charity provides a gateway to part of Guyana’s interior and to Venezuela and the Atlantic Ocean. The Pomeroon River is a well-used corridor linking Guyana and Venezuela, making the port one of the busiest in the country. We boarded a Stoll Estate launch at Charity, arriving at the Stoll Estate after 30 minutes. Rehabilitation is well underway with the planted area substantially cleared of undergrowth, the drainage/irrigation canals dredged, and a nursery established for the production of replacement palms of hybrid and dwarf varieties.

Guyana, officially the Co-operative Republic of Guyana, is located on the northern mainland of South America, between Venezuela and Suriname (formerly Dutch Guyana). Because of its strong cultural, historical, and political ties with other Anglo Caribbean countries and the Caribbean Community (CARICOM), Guyana is closely identified with the Caribbean region. Bordered by the Atlantic Ocean to the north, Brazil to the south and southwest, Suriname to the east and Venezuela to the west. Guyana is the fourth-smallest country on mainland South America after Uruguay, Suriname and French Guiana, with a land area of 215,000 square kilometres (83,000 sq mi). Originally inhabited by many indigenous groups, Guyana was settled by the Dutch before coming under British control in the late 18th century. It was governed as British Guiana, with mostly a plantation-style economy until the 1950s. It gained independence in 1966, and officially became a republic within the Commonwealth of Nations in 1970. The legacy of British rule is reflected in the country's political administration and diverse population, which includes Indian, African, Amerindian, and multiracial groups. Guyana is the only South American nation in which English is the official language. The majority of the population, however, speak Guyanese Creole, an English-based creole language, as a first language. In addition to being part of the Anglophone Caribbean, Guyana is one of the few Caribbean countries that is not an island in the West Indies. CARICOM, of which Guyana is a member, is headquartered in Guyana's capital and largest city, Georgetown. Geographically, Guyana lies between latitudes 1° and 9°N, and longitudes 56° and 62°W and is recognised for having five natural regions; a narrow and fertile marshy plain along the Atlantic coast where most of the population lives; a white sand belt more inland, containing most of Guyana's mineral deposits; the dense rain forests in the southern part of the country; the desert savannah in the southern west; and the interior lowlands consisting mostly of mountains that gradually rise to the Brazilian border. The climate is tropical and generally hot and humid, though moderated by northeast trade winds along the coast. There are two rainy seasons, the first from May to mid-August, the second from mid-November to mid-January. Guyana has one of the largest unspoiled rainforests in South America, some parts of which are almost inaccessible by humans. In 2012, Guyana received a $45 million from Norway for its rainforest protection efforts. This stems from a 2009 agreement between the nations for a total of $250 million for protecting and maintaining the natural habitat. Thus far, the country has received $115 million of the total grant. The main economic activities in Guyana are agriculture (production of rice and Demerara sugar), bauxite mining, gold mining, timber, shrimp fishing and minerals. The Gross Domestic Product (GDP) in Guyana was worth US$3.45 billion in 2016. Guyana averaged a trade deficit of US$105.48 million from 2001 until 2017. However, the economy of Guyana is on the verge of receiving a massive boost from the revenues expected from the Liza Oil Field which was discovered in 2015. The discovery, which was the largest in the world that year, could see Guyana’s economy benefit by many billions of dollars annually from recoverable reserves which may range from 1 billion to 3 billion barrels. The country is establishing a Sovereign Wealth Fund in order to effectively manage its future oil revenues. The Commonwealth Economic Adviser, Mr Daniel Wilde has stated that, “If used wisely, Guyana’s oil revenue could help it to fundamentally transform its economy and enable it meet key sustainable development goals”.

A Renewed Focus On Coconut Production in the Pomeroon River Region

In this context it is heartening to note that the Guyanese authorities are retaining a focus on the agribusiness sector within the country, which is an importer source of employment for the rural poor. With Guyana’s coconut products winning growing international recognition on regional and international markets, those from the Pomeroon River region are in particular demand for coconut water, Guyana’s Agriculture Ministry is working with producers across the country to further strengthen efficiencies and the quality of coconuts and coconut products produced. The Ministry of Agriculture has been pushing for producers to extend their operations in the manufacture of value-added coconut commodities with product sets such as fresh and packaged coconut water, virgin coconut oil, shredded coconut flakes, coconut flour and coconut shells for generating power, having the capacity to boost industrial activity.

This site uses Akismet to reduce spam. Learn how your comment data is processed.

Any cookies that may not be particularly necessary for the website to function and is used specifically to collect user personal data via analytics, ads, other embedded contents are termed as non-necessary cookies. It is mandatory to procure user consent prior to running these cookies on your website.